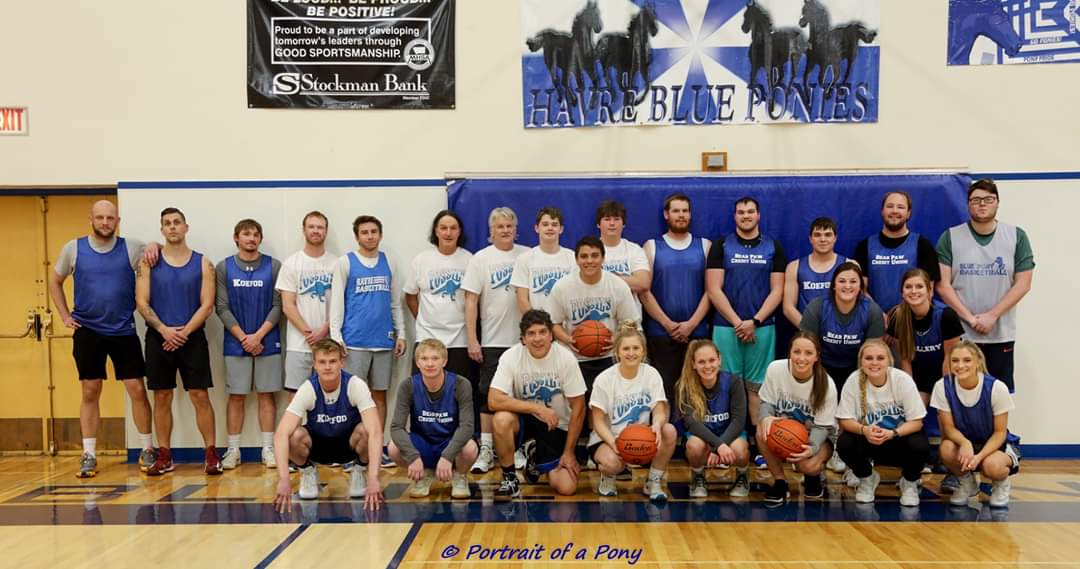 The evening was easy going and relaxing, just what is needed after the busy Christmas holiday. Alumni enjoy getting together for a ‘just for fun’ game and friends, family and fans have a great time cheering on their favorite alum. This year there was a new twist for the teams. One team was ‘The Fossil’s’. In honor of the HPSEF upcoming Fossil Festival - All Class Reunion 2020 year long planning and promotion. Some of the players wore a Fossil’s t-shirt (provided by HPSEF) not according to age, just for fun.

The ‘Fossil’s’ won the main event. Thanks, girls and guys of all ages for a great evening.

We would like to say THANK YOU to the following volunteers and participants for the success of the 14th Annual Holiday Hoops Blue Pony Alumni Basketball Games. Dennis & Jean Murphy, we couldn't have done it without you. Patch Wirtzberger and Grayson Winsor, once again you came through for us and organized the players and game night. Skills USA, thanks for the concessions, always need a snack while watching a game. Coca Cola Co. for providing water for our players. Thank you, again, Carol Gabrielson, "Portrait of a Pony" for capturing the action and players with your amazing photographs. To all that purchased raffle tickets, we appreciate your support. There were 2 baskets raffled off, just to add a little something extra to the evening festivities. Congrats to Jodi Korb, who took home the Blue Pony basket and Pam West won the New Year's basket. Thanks all fans that came out to cheer on their favorite alumni and brought food for the food bank. We are proud to say we delivered 117 pounds of non-perishable food items to help replenish the food bank
shelves. And last but not least, thank you players, without you there would be no game. John Shennum, * Morgan Mazurkiewicz * Sam Lippy * Tanner Lowe * Grayson Winsor * Anfernee Standing Rock * Jason Castillon * Tony Filler * Nate Korb * Trey Trahant * Kaylee Nystrom * Jacob LaBrie * Jase Stokes * Jase Kato * Nate Rismon * Kade Rismon * Jake Sedahl * Isaac Warp * Trey Murphy * Julie Wagner Reesor * Kevin Tibbits. Thank you time/score keepers: Mason Rismon, Trent Maloughney, Kaleb Spangler and Dylan Chvilicek.

Tuesday, December 26th the Foundation was pleased to host the annual alumni basketball game, held at Havre Middle School. Twenty-five alumni players took to the hardwood to enjoy some friendly competition. Several spectators in the stands had a good time cheering for their favorite alum. The participating players were:

Havre Public Schools Education Foundation held it's 12th Annual Holiday Hoops Blue Pony Alumni Games on Monday December 26th at Havre Middle School. An outstanding turnout of alumni players and fans were in attendance. Fans were asked to donate a non-perishable food item as their fee for the evening. The Foundation is pleased to announce that 99#'s of food was delivered to the Havre Food Bank following the games.

Before the games began many of the fans filled up on delicious Chili provided by PJ's, including chips from MSU-Northern food service and cookies from Havre Public Schools.  The main event of the evening, the games, would not have been possible without Patch Wirtzberger and Grayson Winsor. A big thank you to them for spending weeks contacting alumni to participate and handling necessary details as well as being 2 of the 30 players. The rest of the participating alumni are CJ Evans, Tanner Veis, Jared Weigel, Billy, Gary and  Dani Wagner, Nate, Kade and Shawn Rismon, Jared Boles, Austin After Buffalo, Kevin Tibbetts, Andy Kiem, Jason Castillion, Jeremy Giardina, Paige Henderson, Tori and Morgan Mazurkiewicz, Michael Sharp, Andy Pester, Chris Brandt, Jonathan Faber, Tray Trahant, Michael Compton, Tanner Lowe, John Shennum, Ramsay Drew and Wyatt Lindbloom. Also, thank you very much for the game officials Clay Vincent and Lindsay Eagleman and the score/time keeper, Cori Winsor. Thanks also to New Media Broadcasters and Havre Daily News for helping get the word out about the games. Please accept an apology if anyone was inadvertently left out.

HPSEF is very pleased the players and volunteers shared their time and talent with the community and so many fans came out to cheer on their favorite alumni. The Foundation is very proud of all past, current and future Blue Ponies.